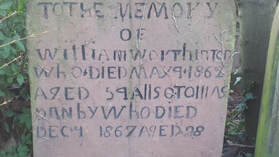 THOMAS DANBY – was killed in a train crash, along with William Johnson, the gatekeeper and signal man, at Rainhill Station on 4 December 1867.

Thomas was a cabman for Mr Crouch of Rainhill and was only 28 years old.  He had been married the previous year and his wife, Ellen, would give birth to their daughter a month after his death.

Thomas was actually baptised as Edward Thomas Danby in Selby, Yorkshire, to George and Mary Danby and was one of four children.  In 1861 he was still living in Selby and employed as a carter.  It must have been some time after this that he came over to Rainhill and presumably took up work for Mr Crouch as a cab driver.

In 1866 he married Ellen Worthington who lived at 6 Houghton Street with her father and mother, William and Peggy, and two younger sisters, Alice and Elizabeth.  William had been a Railway Police Constable but in 1861 was a Railway Gateman.

Thomas was driving the cab for Mr Edward Ackerley and his sisters on the fateful evening and was attempting to cross the line along with another cart when a goods train hit them killing the gateman, William Johnson, two horses and fatally injuring Thomas who sadly died the next morning.  According to the inquest Elizabeth Stevenson, Thomas’s neighbour, had been nursing him at his own cottage.  Elizabeth lived in Roby’s cottages so presumably Thomas and Ellen also resided in one of these cottages.

Thomas and William were both buried on 8 December 1867 at St Ann’s Church.  Thomas was buried with his father-in-law William Worthington.

Ellen Danby gave birth to their daughter, Mary Ellen, on 14 January 1868. Ellen remarried in 1870 and had three more children.  Mary Ellen Danby married John Green in 1887 and had eight children.