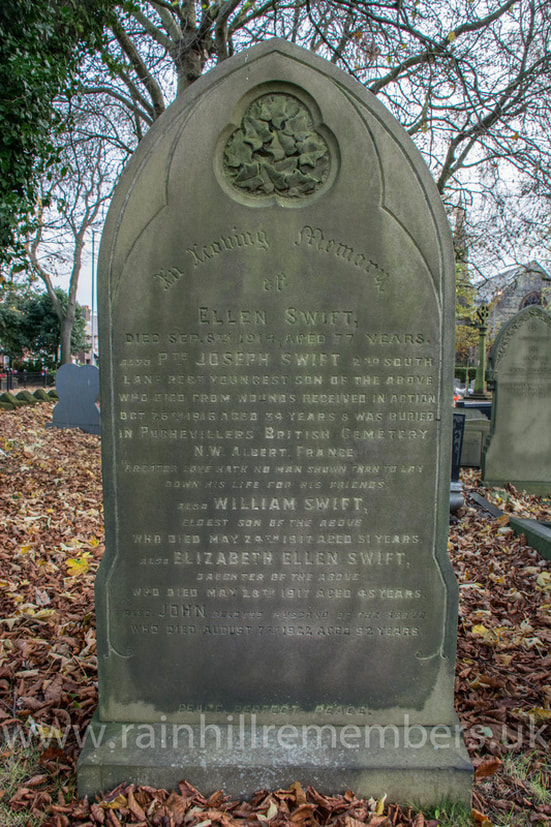 Inscription reads:
Pte JOSEPH SWIFT 2nd South
Lanc Regt youngest son of the above
who died from wounds received in action
Oct 26th 1916 aged 34 years & was buried
in Puchevillers British Cemetery
N.W. Albert, France
Greater love hath no man shown than to lay
down his life for his friends
Joseph Swift was the fifth son of John and Ellen Swift and according to the 1911 Census lived at 27 Ellaby Road and worked as a painter for a Colliery proprietor.

Joseph enlisted at the Army Recruiting Office, Town Hall, St. Helens on 30th November 1915 as Private 27287 in 10th South Lancashire Regiment. He was 34 years old. His attestment papers imply that he joined from the Army Reserve Class B and his medical papers state he was fit for general service but with poor vision and a hernia.

In September 1916 he disembarked his ship and went to Rouen and on the 13th proceeded to join the Prince of Wales Volunteers, 2nd Battalion South Lancashire Regiment. He was wounded in action on 21st October, admitted to hospital on the 23rd but died of the wounds on 26th October 1916. He is remembered on the family grave in St Ann’s churchyard.

In February 1917 his father John received his personal effects, consisting of: - Note book, razor in base, National Registration Card, letters, belt, card case and a bag.

In March 1922, his father acknowledged receiving Joseph’s war medals, the British War Medal and the Victory Medal. He also received a Memorial Plaque and Scroll.